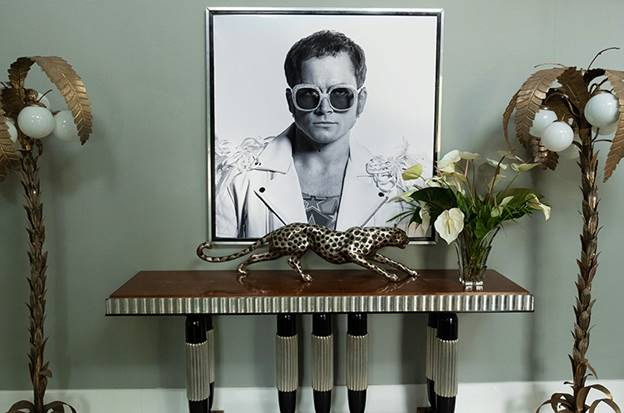 “The idea,” says Director Dexter Fletcher, “was to create something that would genuinely explode off the screen, a riotous joy-ride of imagination, celebration and drama.”

They toured Elton John’s Windsor house and met with him early on re: the look of the film, as he was not only the subject but also one of the producers, along with his husband David Furnish. Farr was impressed with the icon’s openness to their creativity, his preference that they not religiously re-create his environs, but “surprise” him with their interpretations.

Thus, while Elton’s childhood home has that beiged-down vintage realism [and an opportunity to use truly vintage wallpaper and fabrics!]…

Her sense of whimsy and wide perspective has allowed her to build a network of what she refers to as “mad collectors” of vintage items.

There are a huge number of sets, from the local pub to posh London eateries, a range of offices and homes, private jet plane to crowded dressing rooms, and, of course, the stage shows, from The Troubadour to Dodger Stadium!